Power Africa: the US key strategy 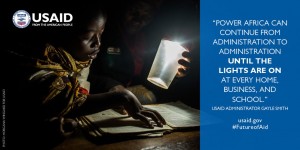 Power Africa: the US key strategy

On August 4, the United States of America  submitted a communication to the United Nations regarding its participation in the next United Nations climate change negotiations in Bonn. A shift and a global reflection for its key strategy: Power Africa. Analysis.

On August 4, the United States submitted a communication to the United Nations regarding its participation in the next United Nations climate change negotiations in Bonn and other events related to climate change. The US will indeed be part of the 23rd Conference of the Parties (COP-23) of the UN Framework Convention on Climate Change. In recent a press release, the State department indicated that this participation aims “to protect U.S. interests and ensure all future policy options remain open to the administration.” And it added: “such participation will include ongoing negotiations related to guidance for implementing the Paris Agreement”.

On June 1, however, the US president, Donald Trump announced his intent to withdraw from the Paris Agreement. But while he was in Paris during Bastille Day in july as a host of the French President Emmanuel Macron, he said during a press conference that “something can happen”. It means that there is a shift in the US position toward the Paris Accord. In the  press released , it mentionned that the US president “is open to re-engaging in the Paris Agreement if the United States can identify terms that are more favorable to it, its businesses, its workers, its people, and its taxpayers.”

The US said its willing to find “a balanced approach to climate policy” and will promote economic growth and ensure energy security with various approaches.

“ We will continue to reduce our greenhouse gas emissions through innovation and technology breakthroughs, and work with other countries to help them access and use fossil fuels more cleanly and efficiently and deploy renewable and other clean energy sources,” related the press release.

Recently, the United States of America government led initiative, Power Africa, has released its annual report. Power Africa is the US initiative aims to electrify Africa with more than 150 public and private sector partners, dedicated to invest 54 billion US dollars to achieve Power Africa’s goals.

Power Africa wants to increase installed generation capacity by 30,000 megawatts (MW) and adding 60 million new electricity connections by 2030. The 2017 report highlights how Power Africa has facilitated more than 10 million electrical connections for more than 50 million people in Africa through initiative such as Power Africa’s Women in African Power (WiAP) network.

This report shows financing agreements which have generated more than 500 million US dollars in US export.  Power Africa announced that over the next year it  will work with more than 100 US companies, African partners and other donors, the private sector to promote economic growth and support rural electricity through partnerships.

“The Government of Uganda is an important Power Africa Partner that is supporting a predictable investment environment that attracts private sector interest in the energy sector. We look forward to using the momentum from Uganda’s Power Africa Day to support Uganda’s electrification efforts,” stated Herscowitz.

“We appreciate the partnership of the U.S. Government, and welcome the investment from outside developers and investors: as we look to the future of Power Africa, Uganda is ready to tap into all of its resources, including human resources along with the water, wind, sun, gas, and steam that will power our economy,” said Irene Muloni, Minister for Energy and Minerals in Uganda..

Two grants have been signed by the U.S. African Development Foundation (USADF) for $100,000 each under the Power Africa Women in Energy Grand Challenge to grantees Eseza Musoki of CODE-Uganda and Mariah Bawubya of Joint Energy and Environment Projects (JEEP).

“Female entrepreneurs have the power to bring change from the bottom up and from the top down,” said U.S. Ambassador Deborah R. Malac, who presented the grants.