Morocco, on the road to the COP 22 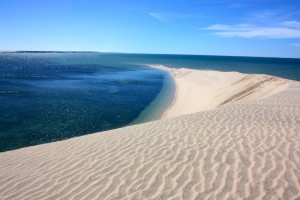 The city of Dakhla in the south of Agadir in Morocco will host,from 17 to 22 March 2016, the second session of the Crans Montana Forum (CMF) devoted to « Africa and South-South cooperation ». Gender, youth, human security, religious and environmental  education,  education, public health will be among the discussions. In this second edition, organizers have also planned to hold various parallele panels on Climate Change, as Morocco will host the UN Conference on Climate Change from 7 to 18 November 2016. These panels will be held under the title of : « On the way to the COP 22- The International Community role in the protection of the Pacific Small Islands States .” The issue of “loss and damage” must be at the centre stage. Another panel will be dedicated to Access to energy. In February, Morocco’s King Mohammed VI has inaugurated the 500 MW multi-stage Noor-Ouarzazate which aims to produce at least 2,000 MW of electric power from solar energy by 2020. In Dakhla, a wide range of people are expected to attend the Forum. Over 800 participants from 112 countries had participated in the last edition. Established since 1986 , the Crans Montana Forum is a Swiss Non-Governmental International Organization.