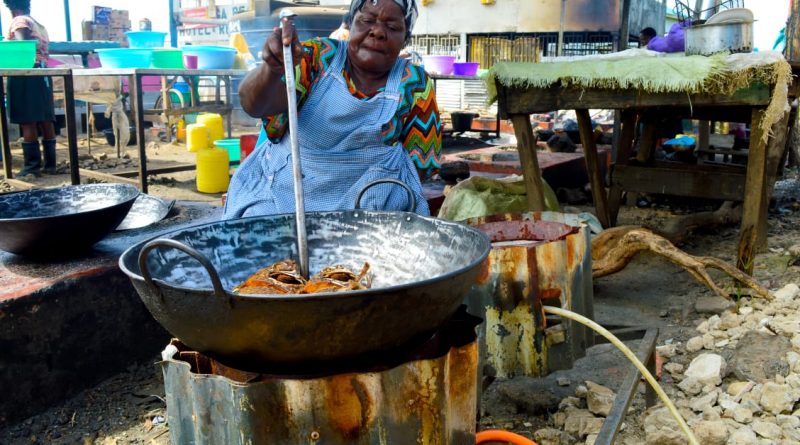 In Kisumu city’s Central Business District, the third largest city in Kenya, a stroll along the shores of Dunga Beach reveals a rare but increasingly common practice in  an area famous for its thriving fishing industry.

A long row of traditional cooking points has been erected next to a rusty dumping bin covered with large canvas. There are several gas tubes connected to the cooking points. Six women are busy frying fish while a few customers wait patiently. One visiting the site for the first time can only get a sense of what is going on when they move closer and notice the huge biogas plant erected to provide the women with clean energy.

A group of young people concerned about the spread of invasive water hyacinth weed and huge volumes of organic waste in the area have turned what residents used to consider a misfortune into an environmental goldmine.

Residents from Dunga and Nyalenda slums are implementing three projects at the beach, including a women’s biogas plant and two waste management projects, in order to fight climate change.  Last year, the levels of Lake Victoria rose, displacing hundreds of residents.

This morning, Andrew Kipchirchir is working with Ibrahim Otieno and Victor Didi,  two young men from Dunga community. Kipchirchir runs the biogas plant to reduce the use of firewood for cooking fish on the beach.  “This project is a collective effort which brought enthusiastic residents : we pick the weed from the lake as well as other organic waste and use it to produce biogas which the women use for cooking,” he says. Biogas can also be produced from animal and kitchen waste, fish offal, cactus weeds, and other organic waste.

The Dungas and Nyalenda communities were far from achieving environmental protection. Women have been using firewood heavily and destroying several indigenous trees along the lake for cooking over the past few years. Women admitted using plastic waste to complement firewood, despite knowing the dangers.

Today,  most of women from Dunga beach are  cooking with  biogas . “It is a very good initiative: most of us spent a lot of money purchasing firewood, others also resorted to cutting trees and that has left the shores of the lake exposed to soil erosion,” Josephin Apiyo, one of the workers  explains. Last year, the beach was inaccessible for several months after rising waters of the lake resulted in flooding which destroyed several infrastructures including hotels .

A few meters away from Dunga beach, residents who once relied on farming and fishing claimed they have changed their crops to survive persistent crop failure they attribute to climate change. “We are trying to adapt and most of us have now stopped growing the crops we used to grow because they no longer give any yields like in the past: the erratic rainfall patterns have pushed most of us to plant only crops that can survive long periods of drought,” Michael Nyaguti, a resident explains. He believes that the authorities have not done enough to enlighten people about climate change and encourage them to adopt behavior that can help restore the environment.

Currently UN-Habitat in collaboration with the devolved unit is implementing the development of Kisumu’s lakefront with a focus on preserving its wetland areas while also improving its tourism potential. A policy framework to help implement the project has already been endorsed by the local county assembly.

With plastic’s threats, a group of volunteers from Dunga and Nyalenda  undertake to clean some of the worst affected areas, the river Wigwa,  which drains its waters to Lake Victoria.  The river is choking in filth and is full of plastic waste. The plastic bottles and other waste are swept into Lake Victoria, and pollution  gets worse whenever it rains.

One of the volunteers, Ibrahim Otieno takes part in  weekly cleanings on the river and  at another beach dubbed “Hippo Point” with a group of youths. “The river is heavily polluted and it is not safe to consume any fish caught from it because of the metals. The river is also contaminated with sewer water,” he explains with disappointment. He asserts that the volunteers have also been undertaking advocacy and encouraging fishermen to stop carrying food in plastic containers when going for fishing expeditions at night. “Most of the fishermen dispose of plastics in the lake and that is a threat to the environment. We always try to encourage them to avoid it as part of our efforts to promote awareness,” he emphasizes.

As part of Africities Summit held in Kisumu last  week, climate change was a key theme that caught the attention of several delegates  keen to ensure that local communities are incorporated in the quest to build climate change adaptation and mitigation. The Intergovernmental Panel on Climate Change (IPCC)  sixth report which elicited discussions during the summit highlights the dangers urban centres face due to global warming. The impact of climate change on  Intermediary cities like Kisumu is one of the reasons why communities need to come up with ways to adapt and mitigate. Kisumu Governor Anyang Nyong’o said intermediary cities are  feeling the pinch of climate change and that proper planning is crucial to reversing the trends. The governor believes that concerted efforts are needed to help address the problems climate change poses to the environment. He emphasized the need to strengthen local communities to build adaptation resilience.