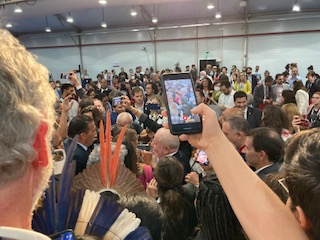 President elect Luiz Inàcio Lula da Silva came in Sharm Sheikh at COP 27 today to claim his country will come back to the climate talks. Surrounded by a crowd proclaiming his name, Lula announced Thursday evening at the COP 27 several actions including the creation of a ministry for the natives of the country and the organization of the 30th United Nations Conference on Climate Change in Brazil in 2025. He also called for rapid and concrete progress on the financing of the 100 billion earmarked for developing countries and on the establishment of a financial mechanism on loss and damage. Lula returns to power in a difficult context in his country. According to the indigenous people of Para State, a state in northern Brazil (centred around the Amazon estuary), part of this area is destroyed.