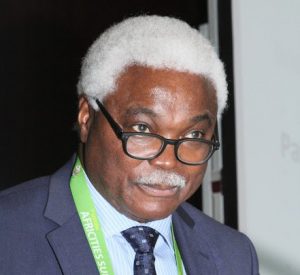 Climate Action: ” We want to include UCLG Africa among the members of the climate ecosystem ” –
Jean Pierre ELONG MBASSI ( Secretary General of UCLG Africa) 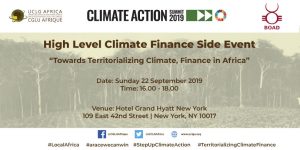 Ahead of the UN Climate Action Summit in New York , millions of people across the world, especially youth have been taking part in protests calling for action against climate change. Cities and Local Governments from across Africa also joined climate strikes as the vulnerabilities of climate change continue to devastate the continent with storms like tropical cyclone idai that killed more than 1,300 people earlier this year to deforestation through human activity that is plaguing Sub-Sahara Africa. Youth have taken to the streets and demonstrated across African cities from Ghana to Lagos, Nairobi to South Africa demanding climate justice for all. For Jean Pierre Elong Mbassi , Secretary General of UCLG Africa, “the fight against climate change will be lost or won in cities and territories, depending on the way and urgency in which leaders of local and regional governments invest in, or be associated to climate action.” On September 22nd ,The United Cities and Local Governments of Africa’s Climate Task Force ( a coordination of multiactor), hosted a High Level Climate Finance Side Event in New York. A few days after the event, Mr Elong Mbassi share his view to ERA ENVIRONNEMENT.

ERA ENVIRONNEMENT: What were the main outcomes of the High Level Climate Finance Side Event ? 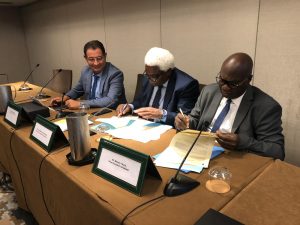 ERA ENVIRONNEMENT: How it can happen?

Jean-Pierre ELONG MBASSI: One thing is to have locally determined contributions and local climate and energy plans, another one is to translate these plans into investment programs that are bankable and implementale. The side event specifically addressed this issue in two panel discussions: the first panel addressed the enabling conditions for local and regional governments to have the capacity to define bankable climate projects; the second panel that gathered mainly the financial institutions addressed the conditions to fulfill for local and regional governments to access climate finance. The conclusion was that the new narrative shall insist on the business and job opportunities created by the shift from high to low carbon economy, instead of highlighting mainly the difficulties and amount of money that this shift would require, which is so far the narrative put forward. The representatives of the banking sector present confirmed that the market is signaling the readiness of the business community to embrace a low carbon development pathway. They therefore confirm that they are ready to collaborate with UCLG Africa to better involve the financing of local and regional governments climate investments in their portfolios. They however pointed out that this will be done if and only if the public authorities show their resolve to embark on the green and circular economy. For example they indicated that a good sign would be to introduce carbon pricing as a clear indication of the will of the public authorities to privilege from now on a low carbon economy. It is therefore critical that all existing development plans be reviewed following the low carbon development perspective. Since 80 per cent of the resources needed to invest in the shift toward a low carbon economy will come from the private sector instituting a carbon price or taxation would send a clear message to the market and the business in favor of the shift from the old high carbon economy to the preferred low carbon economy.

ERA ENVIRONNEMENT: The West African Development Bank (BOAD) and UCLG Africa signed a Memorendum of Understanding (MoU). What does this MoU mean for cities?

The provisions of the MoU defined that the BOAD accepts to provide financial support for the operation of the UCLG Africa Climate Task Force and to grant UCLG Africa the status of implementing partner for its climate portfolio. On its part, UCLG Africa commits to mobilize the interest of local and regional governments to climate action and in particular the formulation of LDCs feeding into the process of NDCs revision. UCLG Africa will also assist BOAD to develop and implement a portfolio of local and regional governments climate projects, that could possibly benefit from the Global Environment Facility, the Adaptation Facility, and the Green Climate Fund which BOAD is an executive agency of.

ERA ENVIRONNEMENT: How will cities in Africa get access to climate finance especially the Green Climate Fund but also the Urban Municipalities fund from the African Development Bank?

Jean-Pierre ELONG MBASSI:One of the difficulties that local and regional governments encounter when talking about their access to climate finance is their possible inability to prepare bankable projects. The Mayor of Accra, Mohammed Adjei Sowah, responded clearly to this question in his statement during the first panel of the side event, saying that if it is limited capacity that impedes local and regional governments access to climate finance, then let’s address this capacity gap instead of agonizing about it. He therefore relayed the appeal sent by UCLG Africa that the national authorities and the international community accept to invest in a strong readiness program targeting the preparedness of local and regional governments to define bankable climate projects. The readiness program should also address the transparency and reporting system required by the climate finance institutions as conditions to fulfill in order to be able to access climate funds.

ERA ENVIRONNEMENT: Following the Africities Summit in 2018, how far has UCLG Africa gone with its Cities Finance fund introduced at the summit?

ERA ENVIRONNEMENT: What will UCLG Africa and its Taskforce hope to bring to COP25 ?

Jean-Pierre ELONG MBASSI: UCLG Africa wish to remind that the climate emergency that the UN Secretary General Summit in September 2019 highlighted very strongly. The COP 25 in Chile should take up this climate emergency and reflect on how to accelerate the implementation of the Paris Agreement as well as raising ambition in order to achieve the target of global warming limitation to 1.5 degree Celsius by the end of the century. As you know UCLG Africa pledges that the revision of the NDCs should start with the elaboration of LDCs as mentioned before. We want to include UCLG Africa among the members of the climate ecosystem , and to have local and regional governments as key stakeholders in climate action. UCLG Africa wishes also that the climate ecosystem include national associations of local and regional governments as implementing partners for all climate finance mechanisms and institutions including the Global Environment Facility, the Adaptation Facility and the Green Climate Fund. We also pledge for the definition of a strong capacity building program targeting local and regional governments in order to speed up the production of LDCs and their translation into a pipeline of climate investments projects, as well as the setting up of a measuring, reporting and verification system defined at the local level, that is aligned with the national and global Mesuring Reporting and Verification (MRV)) system. We will be also partnering with members of the UCLG Africa Climate Task Force and organize a series of side events on issues of interest for African local and regional governments in the area of climate change.