by the Adaptation Fund

A US$2.44 million program for an innovative approach to respond to local climate adaptation needs has been approved recently  by the Adaptation Fund  for  South Africa. Explanation. 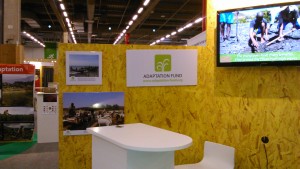 “One of the strengths of the way the Adaptation Fund works is that it allows us to respond in a multi-pronged way to the needs of the communities in the areas where we are working,” said Mandy Barnett, Project Director for SANBI. “In the Small Grants Facility [SGF]similarly, we have interventions looking at climate resilient livelihoods, climate smart agriculture, and climate proof settlements responding to the needs expressed by the communities in vulnerability assessments and the project development process, ” she added.

In October 2015, the first four project concepts were approved for contracting and implementation by SANBI’s Steering Committee. With the Small Grants Facility, local communities will work in partnership with community-based organizations to build resilience to climate change.

What is the Small Grants Facility project about ?

“The SGF builds on the principles of Direct Access and involving and empowering communities through capacity building and delivering tangible benefits,” said Adaptation Fund Board Chair Naresh Sharma. “So this is very good news and an important achievement for the enhanced Direct Access modality, ”  she underlined.

The Small Grants Facility project is based  on two South Africa areas vulnerable to climate change. These two South Africa areas are the Mopani District in Limpopo within the northeast and the Namakwa District in the Northern Cape of the northwest part of the country. . The Small Grants Facility strives to increase climate resilience there by working with local stakeholders. People in these areas  are facing  warming temperatures, increasing intensity of rainfall events and variability, water scarcity and droughts, seasonal shifts and storm-related disasters.

To implement climate adaptation response strategies, the Small Grants Facility fosters local practices so that assets, livelihoods, and ecosytem services are protected from climate-induced risks, said the Fund Board.

The four approved Small Grants Facility projects include enhancing water harvesting and installing water-saving techniques through the introduction of compost toilets. The SGF is supporting also  the sustainable use of land and water resources in collaboration with the Heiveld Cooperative ( which produces Rooibos tea), in the Bokkeveld region , 400 km in the northern of Cape Town.

ABOUT the ADAPTATION FUND

The Adaptation Fund (AF) was established in 2001 to finance concrete adaptation projects and programmes in developing country Parties to the Kyoto Protocol that are particularly vulnerable to the adverse effects of climate change.  Since 2010, the Adaptation Fund has committed US$338 million to support 52 concrete, localized climate adaptation and resilience projects in 46 countries, with 3.57 million direct beneficiaries. But, only a few countries in Africa have access to this Fund, said experts. In May, the Adaptation Fund with the help of Morocco and the Francophonie trained 13 countries of Francophone Africa in its first Climate Finance Readiness Workshop in Casablanca, Morocco. The Fund will have another workshop in Casablanca September 6-8 . It will focus on the Middle East and North Africa region. The Fund also  has from today to June 9 a regional readiness workshop in Honduras and another one in India, Madhya Pradesh on August 23-25 , as well as a global seminar planned in Washington on July 13-15.