Ms. Hakima El Haite, Minister Delegate to the Minister of Energy, Mines, Water and Environment of Morocco, in charge of the Environment and Ms. Laurence Tubiana, French Ambassador for climate change  have just published their roadmap for the COP 22. Description. 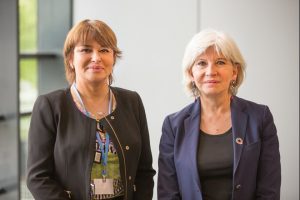 The champions: A response to global climate action request

At the twenty-first session of the Conference of the Parties in Paris, Parties decided that two high-level champions shall be appointed with the aim to :

A few weeks ago ,  at the UN Conference in Germany, Ms Hakima El Haite, the Morocco’s Delegate Minister in Charge of the Environment has been appointed as a Champion for Global Climate Action Agenda. She was formely introduced in Bonn with the second champion, France’s Lead Negotiator of the Paris Agreement, Ms Laurence Tubiana. The two champions will drive the globlal action agenda by :

« We intend to work with Parties and non-Party stakeholders to consolidate transparency of action and tracking of implementation to demonstrate the credibility of voluntary initiatives and coalitions, » emphasized the champions.

Born during the COP 21, the Lima–Paris Action Agenda enhances the implementation of climate action. In Paris, it mobilized more than 70 transformational initiatives involving almost 10,000 players from 180 countries, including over 7,000 local authorities and 2,000 businesses. Indeed, Over 7,000 local authorities made ambitious, operational commitments to reduce their greenhouse gas emissions, according to the UNFCCC Secretariat. Thousands of local leaders, business leaders and civil society figures travelled to Paris to show their commitment and present their solutions and proposals. Ahead of the COP 22, the champions said that they want to include in this process more representatives from national and local governments, businesses and civil society from developing countries. The champions want also to put at the forefront more initiatives and proposal on adaptation, innovation and climate resilience, with a reorientation of financial flows, recalled the UNFCCC secretariat.
Linking initiatives and coalition to the National Action Plans

The champions have launched a consultation process to seek the views of Parties and non-Party stakeholders on their road map for the global climate action agenda, with questions on :

According to the UNFCCC Secretariat, Ms El Haite and Ms Tubiana support climate action and coalitions that have a greatest impact on the ground, and are related to the goals of the Paris Agreement.

« We will be encouraging a stronger connection between voluntary coalitions and initiatives, national action plans and, in particular, nationally determined contributions (NDCs) of Parties, and the implementation of the sustainable development goals,” the champions said.

For them, sectorial initiatives ( in transport, building, energy and other sectors) have to support the implementation of the Nationally Determined contributions which are the framework for policy planning.

According to the UNFCCC Secretariat, the champions will launch a new voluntary initiative on low-emission development strategies for all interested Parties and non-Party stakeholders, in line with the article 4, paragraph 19 of the Paris Agreement.

“All Parties should strive to formulate and communicate long-term low greenhouse gas emission development strategies, mindful of Article 2 taking into account their common but differentiated responsibilities and respective capabilities, in the light of different national circumstances,” underlined the agreement.

The champions new  initiative intends to help countries, cities, regions, businesses, investors and all actors to understand what it takes to achieve the long-term goals embedded in the Paris Agreement while implementing the sustainable development goals, explained the UN Secretariat.