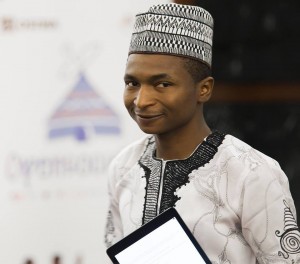 Hamzat Lawal, 25 years old is based in Nigeria. He is a student in political science at the University Abuja and is on the executive board of the African Youth Initiatives on Climate Change. This organization was launched in 2006 with the aim of mobilizing young people to have one voice on the issue of climate change. During the 5th session of the Climate Change conference in Africa and the recent COP 21 forum in Paris, he was at the forefront with side events and workshops.

“Young people do not understand what Climate Change is. So for us, we felt that it was a sense of responsability.”

In Abuja, Hamzat formed an environmental club when he was younger. He also has many partnerships with local radio.

They have their own platform, with their own language. They also used the social networks to communicate. Hamzat has led a local NGO since 2010 and will also send young people in an exchange programme to Europe.

Hamzat wants to localize the opportunity to climate change. He wants citizens to take ownership.

“Why can’t we invest in renewable energy and create jobs?” said Hamzat during the interview.

If he has an opportunity to work in Nigeria, he will go to farming. Investing in Climate Smart Agriculture is a “climatic opportunity,” he said during the interview.

In a short film broadcast during the COP 21 forum in Paris ealrier this month, young people gave their views on how the COP 21 can be a success.

Listen to the interview on his background on the opportunity to climate change by clicking on the links below: